Confined spaces present a special type of danger – a danger that you may not recognize until you’ve already entered a confined space and encountered the hazard. By then, it may be too late. Toxic gases, lack of oxygen, shifting materials inside, and other hazards can cause injury or death before you can take action to protect yourself or a co-worker. 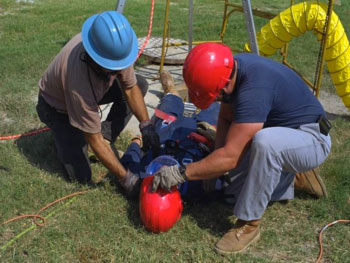 Every year unsuspecting employees are killed as a result of hazardous conditions in confined spaces.

Historically, 60% of these fatalities are would-be rescuers who enter these spaces in an attempt to retrieve the fallen individual or individuals, only to be overcome and become victims themselves.

Confined spaces present many hazards; some of the common ones are:

These are the things you should be aware of before you enter a confined space: