Rigging looks like an easy operation, one that doesn’t seem to require any particular skill or experience. But don’t be fooled. Many people who’ve thought that “anyone can do it” have lost fingers or hands or suffered more serious injuries. We don’t want any one injured while rigging on this job. So I’m going to point out some of the “do’s and don’ts.” Pay close attention. 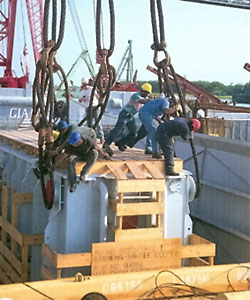 When rigging loads, employees must be able to recognize hazardous conditions such as: